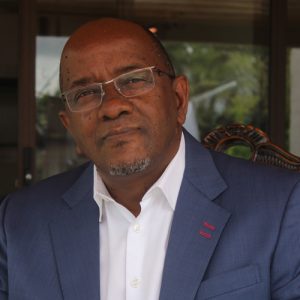 Usi //Hoebeb holds a BA Arts degree (specialising in English, Politics and History) from Leicester Polytechnic (now De Montfordt University) in the United Kingdom. He started his working career as a presenter on BBC Radio Sheffield, UK whereafter he joined the NBC in 1991 and served in various broadcast journalism capacities. He has been in the public relations industry since 1994 when he joined TransNamib and was responsible for the launch of Namibia’s unique rail experience, the Desert Express. He has vast experience in developing effective public relations strategies for both the public and private sectors which include inter alia, SWABOU, SANLAM, NRSC, Skorpion Zinc to name a few.

He was co-principal in the conference co-ordination and management of the 8th SCCA Conference held in Namibia in July 2014 and served as the brand manager for Jezreel Communication’s engagement with the Electoral Commission of Namibia’s (ECN) branding and event management for the National Elections 2014.