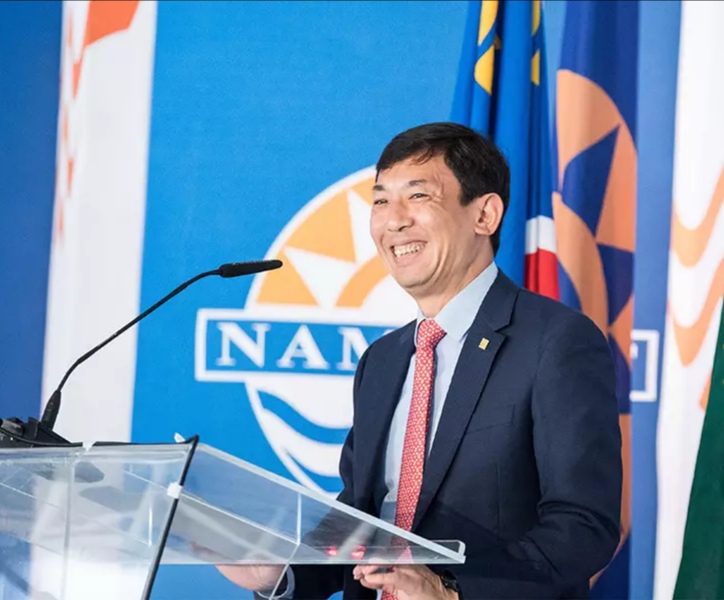 Walvis Bay – The Vice President of the Chinese company which constructed the new container terminal on reclaimed land in the Port of Walvis Bay, and which was officially inaugurated last week Friday, says that the international company has learned a lot from its local suppliers, subcontractors, designers and others who were involved in the the project. “We have learned as much from you in other spheres as you may have learnt from us and for that we remain thankful,” said Li Yi at the inauguration.

CHEC Vice President, Li Yi delivering his speech at the inauguration of the new container terminal in Walvis Bay

China Harbour Engineering Company (CHEC) won the contract to construct the 4 billion Namibia Dollar container terminal in 2014 with construction starting in 2015. Li Yi said that the company spend over 150 million Namibia Dollars on the domestic market. “In addition, CHEC allocated some two hundred million Namibian Dollars to assist in Small and Medium Enterprise (SME) development by making concerted efforts to engage local SME’s in providing certain goods and services,” he told the audience at the inauguration event which was officiated by His Excellency, President Hage Geingob.

As an international company, CHEC has more than one hundred projects of this magnitude in over 90 countries worldwide. But, according to Li Yi, this was one of the most challenging one to date. “Here, for the first time we were faced with the rarest diatomaceous soil in the world – a soil so soft its particle size is less than 1mm. However, this did not deter us and with an international team of over 100 experts from 30 countries pulling resources together, we were able to overcome this great challenge.

In addition, we were further faced with the challenge of hydrogen sulfide gas been released from the ocean floor during the dredging process. Once again, we pulled our worldwide resources and experience to manage this situation to globally acceptable standards, in collaboration with our client Namport.”

In line with its values to ensure a win-win cooperation with the communities in which it operates, CHEC employed over 2,000 Namibians during the construction of the project, ensuring improved spend in the town of Walvis Bay. “We also provided on-site training to over 800 of our local employees, who now have new skills which will improve their chances of employment in the job market. We are particularly proud of the two young students who are recipients of full scholarships from CHEC to study Marine Engineering at one of China’s leading universities. They will and should upon completion of their studies, apply their new-found knowledge for the development of this country. And even beyond, perhaps one day compete for huge engineering projects on an international level”, Li Yi further stated.

In conclusion, Li Yi said that “Namibia’s Vision 2030, which aims to catapult Namibia into the realm of industrialised nations of the world is a commendable blueprint. And the Port expansion project, of which the Container Terminal project is a part, will be a crucial element in cementing Walvis Bay port as the gateway to southern Africa. It will serve to unlock huge trading opportunities between the rest of the world and the large southern African market, positioning Namibia as the ideal throughput enabler. In order to realize this, Namibia will need to further invest in various large-scale infrastructure developments. It would need to upgrade its rail and road network to ensure efficient and effective throughput of goods, increased by the development of the new container terminal; and its water resource challenges would need to be looked at in earnest to meet the demands of industry. In addition, other infrastructure developments such as larger airports to meet the growing demands of the tourism industry would need to be investigated. And CHEC stands ready to provide investment, construction expertise and knowledge transfer and an operational One-Stop Service and be a part of the development of this great nation.”