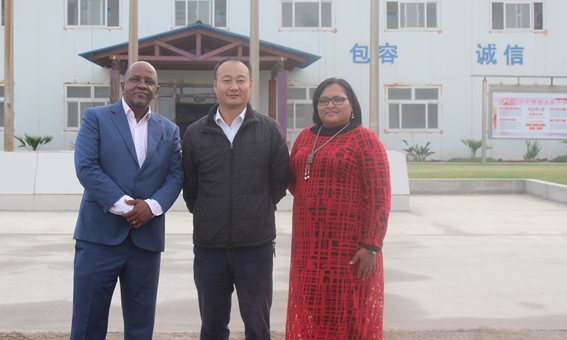 Walvis Bay – “The container terminal in the Port of Walvis Bay can change the way Namibia does business” is the view of communications strategist, Usi //Hoebeb  whose company, Usi Hoebeb Communications (UHC), has served as public relations (PR) agency for China Harbour Engineering Company – CHEC – for the past four and a half years and whose contract came to an end this month.  CHEC was contracted by NamPort to construct the Container Terminal on Reclaimed Land in the Walvis Bay as part of its port expansion project. The container terminal was completed earlier this year and officially handed over to Namport at a ceremony on 1 August 2019.

“Increasing the throughput capacity of the port in terms of its container traffic has opened up a world of opportunities for Namport in facilitating increased trade between its southern African neighbours and their markets in the West, the Americas as well as the East. And this translates into increased traffic and thus positioning not only the port of Walvis Bay, but Namibia as the ideal trade facilitator in the region. This is greatly supported by the existence of the Trans-Kalahari and Trans-Caprivi Corridors, which open up both the central and south-eastern African trade routes. Ultimately our position will have untold financial and economic benefits for the country across a variety of sectors, notably in transport and logistics but also other peripheral benefits in other sectors,” //Hoebeb states.

For //Hoebeb, the experience of working for a Chinese international company has been one of providing a service hitherto unknown in CHEC. “We were reliably informed at the end-of-contract meeting that it is the first time that the company of which CHEC is a subsidiary, uses a local PR agency to build relationships (bridge-building) with local communities, media and other stakeholders and that this has now become a principle which may be rolled out to operations around the world. We are proud to be acknowledged by an international client as leading the way in changing mind-sets,” Usi proudly beams.

And this has been the task of UHC for the past four and a half years. Upon being contracted as the PR agency, UHC developed a comprehensive Communications Strategy, which took into account the socio-political and economic environment of Namibia and how CHEC’s corporate values can be integrated into ensuring greater understanding of not only its operations in Namibia but also the value of its role to Namibia’s socio-economic development. “We had to develop and roll out a strategy which covers all major stakeholders and create a mutually respectful working relationship between them and CHEC across all spheres of Namibian life including traditional, community, local authority and regional leadership; political and economic leadership, the media and other identified stakeholders.” But for //Hoebeb, this was not an easy task in the beginning as “we had to deal with pre-conceived and often prejudiced views on the role of Chinese business in Namibia. And to some extend these were understandable as many did not understand the importance of the project and therefore the role of CHEC in assisting us in achieving certain milestones in our socio-economic endeavours and drive. But we drove hard and did not relent and overcame those challenges with the help of some open-minded, progressive thinking leaders who understood the importance of the project to the country and CHEC’s role in this process,” //Hoebeb says. 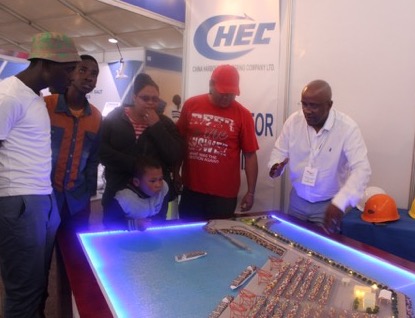 2. Usi //Hoebeb (far right) in action explaining the inner workings of constructing the container terminal to visitors to the CEC stand at the Erongo Expo

The Chinese work ethic is one of the most important lessons learnt through working with CHEC, Usi says. “They operate with a very focused mind-set. We quickly learnt that wanting to implement our communication strategies at speed would not be possible as the Chinese mind-set determines that you focus on a particular objective and ensure that you meet that before moving onto the next. In essence this means doing what you do to the best of your abilities, with focused energies and single-minded determination. In addition, we learnt that being certified does not necessarily make you an expert. Ensuring that the job is done expertly – that makes you an expert!”

Usi believes that the company has done a lot in crossing cultural barriers which cause misunderstandings. “Attempting to create cultural hegemony across cultures is no easy task. However, when one understands that the values across cultures are not just cultural ones but are, in fact, human values such as respect, integrity, accountability and so forth, one starts to realize that we are really not that different from each other – Chinese and Namibian – and are driven by a common spirit of humanity. Once we establish that fundamental commonality, we can start to build relationships based on that understanding. CHEC’s leadership understood that concept from the start and all effort was made to educate Chinese supervisors and managers to respect Namibian opinion and values, thereby moving from a basis of distrust way back in 2014 to a spirit of mutual respect in 2019.

And we are honoured to have been a part of this journey, which had so much value for both CHEC and Namibia in general and the community of Walvis Bay in particular.

And as our job dictates, we were not always visible on the forefront but ensured that the common objectives we developed were reached and for that we shall be forever humbled and grateful,” Usi //Hoebeb concludes.

UHC principal, Nadieshta Jahs says that the past four years have been an extensive process of learning in terms of human psychology. “We came to learn a great deal on the human side of the Chinese workforce. Imagine being removed from your family (wife and kids), seeing them once a year for a few weeks only. That cannot be easy for anyone. And we had to start to see the human side of the Chinese experience in Namibia. That was a great eye opener when dealing with the personnel at CHEC,” she said.